Hi, D4DDYP00L Here with a Saati guide. Are you a fan of overly thicc Drow elves? Does sarcasm tickle your fancy? Have you ever dreamed of back flipping while wielding guns against giant space worms? If all these questions ended with a resounding "Yes" then welcome to my guide.

Here are three builds I use on a regular bases depending on the enemy team and who is also on my team. Example being if I had to flank because we don't have a flank. I will leave some items open so you can adapt these builds as you see fit. Just use these as templates and go from there.

Blast Back now knocks enemies straight up and enemies take 20% more DMG from Saati for 1.5s. 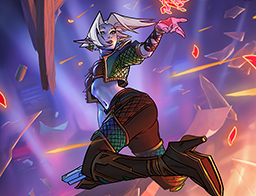 Increase your maximum Health by 160. 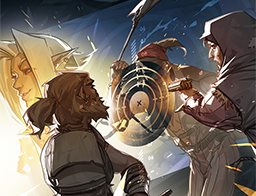 Reduce Damage taken by 12% for 1.5s after using Blast Back. 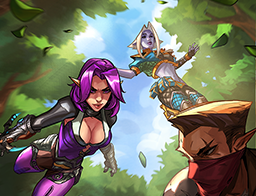 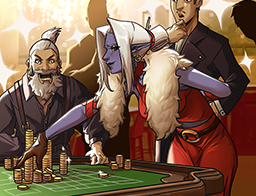 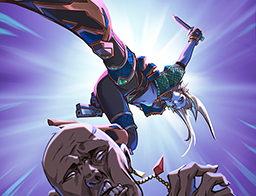 Generate 2 Ammo for each enemy hit with Blast Back.

Reduce the Damage you take from Direct and Area of Effect attacks by 18%.

Getting a kill or elimination heals you for 500 Health, unaffected by Anti-Healing.

This is my go to build for most of the games I play. I use this as more of a melee build or a reactive build to those who get close to me. Which is why I take Haven. Life rip if I decide to flank a bit to help my flank or we are a team with no flank at all. 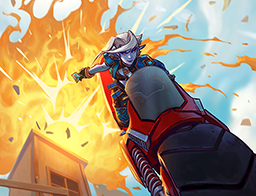 Reduce damage taken by 12% for 2.5s after Ricochet is deployed. 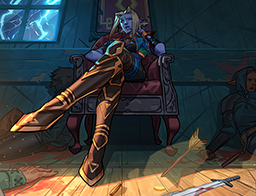 Increase the time and health that Ricochet is out when deployed by 1.2s.

Increase your maximum Ammo by 3.

Increase your maximum Health by 80. 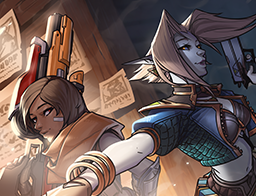 Getting a kill or elimination heals you for 750 Health, unaffected by Anti-Healing.

For this build, you should be on the point and peeking from behind walls. Using your coin as much as you can to disable shields or to reveal stealthy foes. With this, I would take Deft Hands over Haven since you shouldn't be in direct combat as much as the WoO build. Also, take Kill to Heal over Life Rip. You won't be shooting people directly with your weapon. So Life Rip won't be as helpful but Kill to Heal will grant you some fantastic healing since you will be getting tons of assists on those you're hitting over and over with the coins. Also, bit of a side note on this. You can have two coins out at time which is why I prefer deft hands. Also, bit annoying but if you are in front of your decoy and try using your coin, your decoy has a good chance to shot your coin. It won't hit the coin for you but it will activate it. Bit annoying, really.

Also, with the card "Steady Predictions" Each shot will give you 2% ult charge which you hit your coin. I know this doesn't sound like a lot. But with each hit of your coin and the basic charge of your ult, you will be getting nearly 3 to 5 percent every shot and will get your ult back quick. You will be ulting a lot during the match with this card alone. 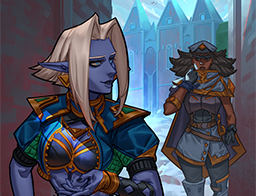 Increase the duration of Dead Ringer's reveal on destruction by 1.5s. 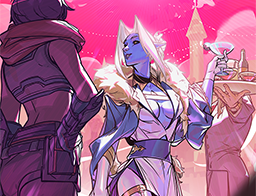 Increase the Health of Dead Ringer by 450hp. 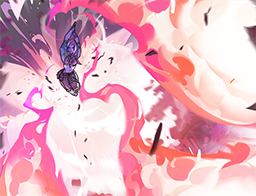 Decrease the time between bursts of Dead Ringer's inhand fire by 12%.

Reduce damage taken by 12% for 2.5s after Ricochet is deployed.

Getting a kill or elimination heals you for 750 Health, unaffected by Anti-Healing.

I use this as my turret build. Here I use this to counter stealthy enemies as well as use it to apply constant fire onto the point. You can use these decoys as stand ins for a certain Drogoz ult when he's about to hit you or a member of your team. Just stand in front of him and place a decoy and enjoy the fire works.

O K A Y, Here I will explain that a good Saati main can counter the listed champions above with ease if played correctly. See, Saati can stealth like the rest of the "S" named characters of Paladins but she goes a step FURTHER BEYOND by also revealing these champions. With an ability known as Dead ringer. People who shoot this will be revealed by Saati. This right here is important since it allows us as Saati mains two solutions. One, Using our time in stealth as a gap closer to find and get the drop on them. or Two, using our time behind walls to line up shots using our ult, Wallbang. If your team has a lot of stealth? Consider using the talent "Heads or Tails" It will do two things, Reveal stealth characters around you as well as pulling them out of stealth. You literally become their bad day with the comfort of shooting from behind a wall. Isn't that nice?? Also a bit of knowledge before we part this talent section. You deal 200% increased damage to shields. This means you will be dealing 900 damage per tick. This is why I stated you can counter most people with shields. Just get behind cover and enjoy the incredible 900 damage per shot for shields. Each shot will also heal you for 125. I know this sounds small but you get five shots per coin. That mean you're getting 625 healing from your coin alone!

Another talent you could use is "Improvised". So, I know that dreaded coin can be a huge pain in the butt to shoot at. That being said, There is a way around this for those of you with poor aim. Taking Improvised will cause your decoys to explode if enemies get close. It does this on proximity and this is never explained in the description for the talent. The 20 units for the explosion, if they are within the 20 units? They will explode out right. So, You can use this in your fight within melee to cause people to take the 500 damage up close and reveal them or allow them to shoot them from afar to reveal them like Sha Lin or Strix. There is also a "V" reticle when you hold the button to place these and use the V reticle to place these. The bottom of the V is where the gun will shoot at. Easy to guide your shots if you want to be an annoying stalker ex to the enemy team.

Now, let me talk about my favorite talent. Window of Opportunity! This beauty grants you a 20 percent damage, making your shots deal 660 per shot versus the normal 525. Not only does this move apply a 250-350 kick off damage, but also grants a ticking damage of 25 every 0.4 seconds for 2 seconds. Ticking six times for a total of 150 damage over time. So, simple match. Let's say you kick them up in the air. The max amount of shots you will land is 2. 660 each shot. That's 1320. The 350 plus the ticking 150 is 500. You're looking at 1820 with a kick and two shots. One more shot at 525 will finish off most people. People use this talent the most for the amount of damage you can do in a quick amount of time. You will have to get in close. I suggest using decoy to do this if you can muster the pips for it. So, say you find you a worm mommy. You want to run up and kick her. She will NOT move. She's immune to knock backs. But she takes the debuff all the same. Allowing you to deal straight damage to her. Also, she has has the biggest head box in the game. That said, you can deal headshot damage at 935 per shot with the debuff on her. two good kicks and four shots later? You'll have her down more than half. Include the two ticks from your kicks and that's another 1000 damage done. two shots from your pistol and you have a dead worm mommy. TAKE THIS KNOWLEDGE AND RUN WITH IT KIDS!

Alright ladies and gentlemen. Here is the section I hate writing about. Those who can counter Saati. Let me be clear, I take no pride in doing this, that being said? Let's start with this fairly.

ANYONE WHO CAN CRIPPLE CAN COUNTER SAATI. That's right. Remember that talent I love so much? The Window of Opportunity? Yeah, if you get crippled, you can't use it. It's a movement ability which means you will be shut down from using it. Also, flyers and teleporters are a good counter to Saati. If they can get around Saati's cover and lock her down, she will not be able to do much. Also, I should say that people who can get a good ticking damage on Saati can spot her through stealth. Vora is a good example of that.

Two special mentions that I want to bring up are Grohk and Atlas. Know how Wallbang, Saati's ult can go through the world and shields and the like. But the one it can not go through is Atlas's shield. It gets stopped. Do not make the mistake of shooting at it. Another thing is Grohk. If you are running the decoy build, Improvised, you will be in a world of hurt since Grohk can bounce against you and the decoys. Dealing damage to both.

Also, much like Saati can reveal others to counter them, anyone who can reveal can also counter Saati's stealth. Even if the enemy team gets illuminate or Strix uses his Flare or Cassie uses her ult? You will be spotted. Just be mindful and run out of their range. You have the best two options to deal with that. Your coin and shooting from behind cover or using your ult to aim back at them through cover.