This guide will tell you how to use "I win 1v1 duel" buttons to kill anyone dares to challenge you in a fair fight (why'd you try to square off in a team game???)

I only have 2 builds for the two most frequently used legendaries:

Chakram Spam: the usual spam chakram around tight corners to poke and annoy the hell out of your enemies. And the occasional spam Q to drive away anyone diving you.

Heavy Blade burst: Turns your heavy blade into Dredge's Abyssal Spike that can be exploded at will. This is for those who opt to use their Heavy Blade as a burst damage tool. Most people underestimate how much damage the blade itself can do while running this legendary, well time to give them a reminder. Throw the blade at an enemy, dealing 250 damage while hitting the ground or a nearby wall, then immediately trigger it for a nice extra 850 damage (no/barely any falloff, total of 1100 damage in the end). Note that the AOE explosion does not cause slowdown, but the initial throw still does if you hit people with it.

Majority of the card points are spent on self-sustain for your "I win 1v1" button and reducing your blade cooldown if you're running the heavy blade burst. Filler cards are up to you.

Vicious Assault in theory also gives you a decent amount of burst damage, but unlike Buck, your damn leap has a long windup and is a hell lot slower than Buck's leap (not to mention Buck has better sustain in general in terms of Bulk Up & resists on leap/heal). Works well against casual newbies, otherwise you'd most likely die, or in best case scenario, trade one kill.

Notes on some abilities:

Your chakram does not suffer damage falloff, but will deal reduced damage (500) on bouncing.

Triggering the blade explosion is a lot faster than the default recalling blade than you'd think.

You can throw chakrams and heavy blade, triggering blade recall/explosion while leaping in the air.

Combat Trance (Q) is Buck mini-ult on a 15 seconds (actually 11 seconds since the cooldown starts as soon as you activate it) cooldown. This is your "I win 1v1" button, better abuse it as much as you can. Try not activating it while you're low on ammo though... (or use Crowd-Pleaser card if you get into that situation too often, but please try not to)

His ultimate can charge very quickly. Using it for damaging enemies, however, isn't recommended unless they're already low and you need to chase and finish them off, as it doesn't apply Cauterize nor affected by Wrecker. Left click will swipe you in any directions (including vertical) while dealing 650 damage (same as your chakram) to anyone in the way, mostly used to chase down weak enemies or a quick mobility option. Right click will have you do a long ass jump spinning animation before touching the ground, dealing a massive 900 damage to those who are too slow to run away from it. You're invulnerable while spinning, but the moment you land, have fun getting burst down if enemies are still around and aiming for that moment. You're also not CC immune, so stuns and Jenos grip/Grover root can screw you over royally.

Heavy Blade now explodes on reactivation instead of recalling, but the initial throw does reduced damage. 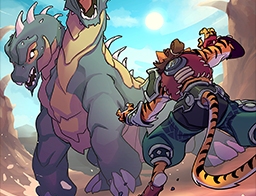 Heal for 225 every 1s while Combat Trance is active. 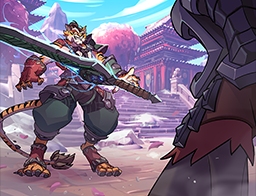 Reduce the Cooldown of Heavy Blade by 2.4s. 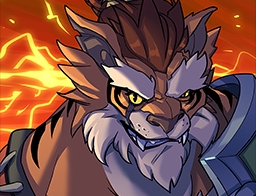 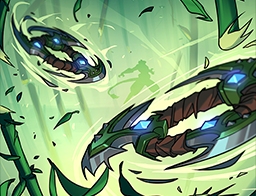 Gain a 60-Health Shield for 4s after activating Combat Trance.

Bladed Chakrams are able to bounce 2 additional times before disappearing.

Heal for 225 every 1s while Combat Trance is active. 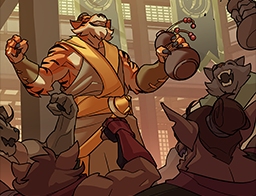 Hitting enemies with Bladed Chakrams Heals you for 75.

Gain a 60-Health Shield for 4s after activating Combat Trance.

He's strong against pretty much anyone who tries to fight him in a direct 1v1 as long as Tiberius has his Q ability. His heavy blade also reduces movement speed of anyone hit by it to a crawl, and if they don't have any movement abilities off cooldown, tough luck escaping after down by 1k hp.

Any flankers worth their while will always have their movement/escape abilities up before trying to engage a Tiberius, usually by baiting his Q ability and wait out. Frontlines can also absorb his chakram Q spams with their shields (heavy blade can bypass deployed shields sans Atlas, but the AOE explosion from running Tigron's Fury cannot pierce shields).

Champions with superior long range poke or comparable burst like Cassie, Lian, snipers will be able to suppress you until you can get into mid/close range (barring surprise attacks). Still, this doesn't mean you can't throw a few long range chakrams at them to force them hide behind cover briefly, as your chakram doesn't suffer damage falloff, aside from reduced damage on bouncing.

Anyone with vertical mobility can dodge your heavy blade AOE burst combo as long as they don't happen to hover near any walls. The blade can still be used to slow them down, however.