Too bad Vora didn't get this Goddess' Blessing

Hello and welcome, one and all to this guide on our favourite moon fox.

I'm sure you're extatic to find out all the little things about this adorable champion and let's get right to it with a quick overview of the character and her abilities.

Io, the Shattered Goddess, is a Support champion with access to what in my opinion is the single most powerful tool in all of Paladins. Her Guardian Spirit, Luna, a deployable pet with the unique property of being able to capture the Objective as if it were an additional Player on your team, while also being completely immune to all forms of Crowd Control.

A very simple yet effective primary fire ability. It deals 400 damage at any range and charges your ultimate by 2% for every shot that connects. It's great for finishing off any low HP targets that might be attempting to run away and gives the goddess a decent damage output for a support.

A very powerful healing ability with no cooldown that uses a rescourse bar instead. It heals the target for 150HP every 0.15 seconds giving you a Heal Per Second 1050 healing a second. A respectible number to say the least.

In the current state of the game, you want to use this ability in conjuction with the Goddess' Blessing Talent adding 15% damage reduction to however you target you're healing, essentially adding a 15% uncauterisable heal to the already respectible 1050 healing a second Moonlight inherently puts out.

As Io, you never actually want to use Moonlight to fully heal your target, but rather only keep them sustained as long as they're in a fight. You need to manage your rescourse bar the entire game and make sure it's up as often as possible, so if your target is out of combat, you can let them be for the time being and switch to the next person who might need help in a fight.

As stated above, this is the ability that plays the main role with Io's playstyle, as well as one of, if not the most powerful single tool in the entire game.

Luna is essentially an offensive turret that's also treated as a 6th player for your team being able to contest and capture the point as well as push the payload like any other player and for the most part that's how you'll use her.

The pet also has the ability to dash into an enemy player Io hit with her Light Bow ability dealing 300 damage and stunning them for 1 second. That ability can only trigger once every 18 seconds however and Luna's dash will abort the moment she loses sight of her target.

Luna gives any comp she's part of the ability to push into the enemy spawn with 5 people, which creates a nearly unwinnable situation for the defending team, since Io can make any player she decides to heal win any duel they decide to take by giving them consistent healing and 15% damage reduction using her Goddess' Blessing talent.

I honestly hate this ability. It's the worst movement among the Supports. It has a super long cooldown, has a predictable path and more often than not, it'll get you out of cover. The only ways to use it well is to either quickly turn 180° and jump to help your team push up or you can use it preemptively if you see someone coming to flank you.

Still, this ability is pretty much the worst thing about Io's kit.

The Shattered Goddess' Ultimate ability. It's not the greatest ultimate among the supports, but it's not horrible by any means. The mistake a lot of players make is trying to be cheeky with it and kill players by sending them off the map. While it's super fun to do, it's really not how you should use that ability for the most part. You should treat this ability in a similar way a Furia would use her Pyre Strike or a Mal'Damba uses his snake reload. It's a flank deterrant that also lets you even out 1v1 situations by getting you a free burst of 1200 - 1600 damage if you follow it up with some shots from your Light Bow, letting you have a fair chance in duels against most flank/DPS characters.

There's a bit of flexibility Io has with her kits, but for the sake of this guide, I'll focus on her basic build and its capabilities. 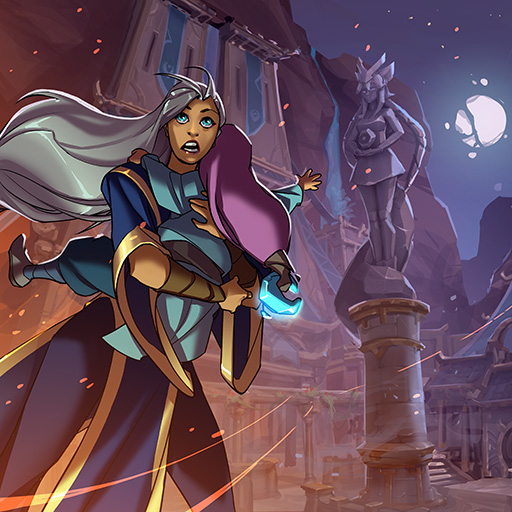 Regenerate 5% Moonlight every 1s while not using Moonlight. 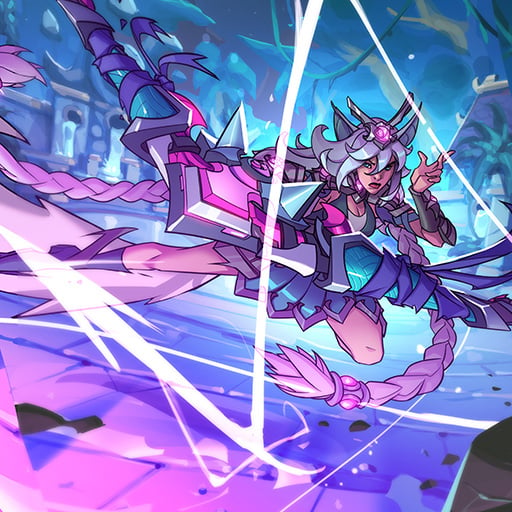 Increase allies' Movement Speed by 24% while they are being Healed by Moonlight. 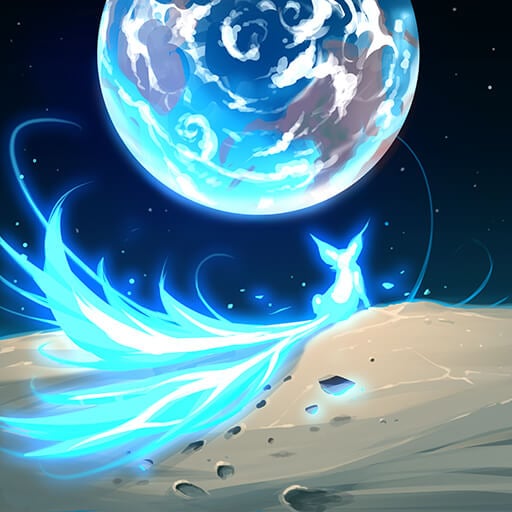 Increase your maximum Moonlight capacity by 24%. 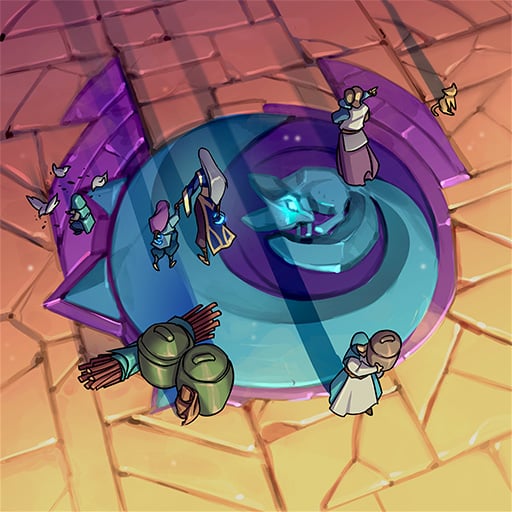 Heal for 20 every time you Heal an ally with Moonlight. 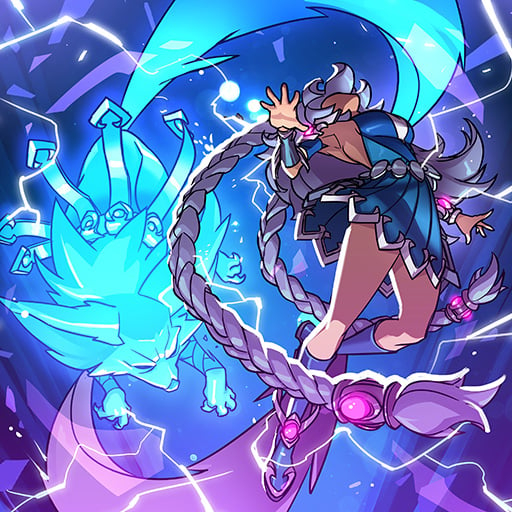 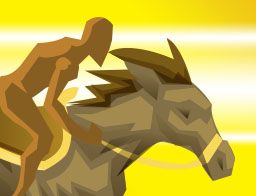 Increase your Mount Speed by 15%.

Reduce the Damage you take from Area of Effect attacks by 7%.

Sanctum of Faith 5 lets you keep up a constant stream of healing by increasing an extra 5% to Io's passive Moonlight restoration. It's a must have if you want to be consistent with your healing.

Swift Arrows 4 adds 24% movement speed to your current pocket target on top of the 15% damage reduction granted by Goddess' Blessing, making them not only more survivable, but also harder to hit. It'd be great to run at 5, but the additional 6% isn't really worth saccrificing your other card slots for.

Moonwalk 3 increases your healing rescourse by 24%. It gives you the ability to keep people sustained for longer and it's another case of "if you could run more, your would", but Sanctum of Faith 4 or Swift Arrows 3 just aren't worth it to increase Moonwalk to a higher level and having that 24% is honestly enough to keep people alive and well in most fights.

Restored Faith 2 Io's one and only self sustain card. It's not great, but that's all you get. You might think about lowering this to one to increase either Moonwalk or Swift Arrows but the problem here is that Restored Faith 1 is horrible for your self sustain and doesn't keep you alive enough. You have to run this card, because you get no other sustain. You're not the type of healer that can stay behind walls all game long like Jenos or Corvus, so you absolutely need this card at 2.

Now, for the last slot, this one is a filler flex slot. I personally like Broken Deity the most, but there are other cards you could put in this slot. Skywalker, Moonlight Garden, Spirit Arrows and Half Moon are all cards you could consider putting into this slot for one reason or another. Play around with what you like the most here. There's quite a bit of flexibility you have.

As to Items, you want Nible + one of the other items listed at the start, depending on your situation and what the enemy team has. Io really has no standardized item choices due to the strength and versitity of her kit and cards.

I picked out these characters to illustrate Io's biggest weakness. Burst Damage. She's horrible at facing any character with high burst and long range, even more so than other supports. She has the least and worst self sustain capability out of any support and a low health to boot with no space in her loadout to add extra health. The only option you really have here is stay out of their lines of sight.

When it comes to Luna placement you want to make sure she's out of their sight if at all possible, since you really don't want to waste your healing rescourse on your pet if possible.

Flanks and squishies that approach you.
Notes

For the most part when you see someone approaching, you want to use Lunar Leap to get away and into a safe position, before they get to you and take you down, if that's impossible however, there are a few things you can do to make the fight as easy on yourself as possible.

Make sure Luna has sight of your opponent. If she does and you hit them fast enough, Luna will be able to react and stun your assailent as they attack giving you a chance to counter dealing some extra damage and evening out the playing field.

Leave this Realm! Use Begone like I mentioned above to push people away from you and get bits of free damage in wherever you can. Be careful to not use it in small rooms however. The sheer size of the projectile and its fragility makes it break before it even gets to hit anyone in small inclosed spaces.

Io is honestly not a great fighter so in gerenal, avoid battles and use Light Bow to hit pod shots here and there in other to charge your Ult.

Too bad Vora didn't get this Goddess' Blessing