Dredge but he is long ranged

This build is primarily for siege matches, but can be used in onslaught too. Don't use it in TDM because everyone is everywhere.

When the match starts, follow a flank path and set down your portal a good distance away from the point. Then, walk up to a spot where you can see down on people, like Kinessa or Strix. When you get there, set another portal down, but DON'T go through it, it's going to be used as an emergency get-away (like Kinessa's warp). Enemy flanks and other long range damage champs will also most likely try to go up to where you are as well. Find an opening for where they can come through and throw your harpoon there. With the Abyssal Spike talent, it will work like Vivian's detector mines, but instead of a visual cue it will be an audio one. If you hear your harpoon pop, check to see who is coming. Any champ listed in the strong against category are easy to fight because most of the time they need a direct path to kill you, meaning you can use other obstacles to your advantage.

If it's one of the weak against champs, then it depends. Strix and Kinessa are dangerous, but not for the close range reason. They can snipe you at a long distance, and since your attacks are lobbed it will almost never reach them. If they get close then they are easy prey. Talus and Viktor are a little more risky, since they can both play both long and close. If you can out heal Talus' damage, then you can most likely either kill him or wait for him to warp away. DON'T GET GREEDY. It will always end up killing you, never chase down a champ unless they are slowed and on a hit away, even then be very careful. Another Dredge can cause issues because of his high damage and harpoon slowing. Most of the time it's a skill game on who's better.

And lastly, the big three. Fernando, Torvald, and Terminus are champs you should ALWAYS run from. Both Fernando and Terminus can get really close without taking a lot of damage, and on top of that, they can both deal loads as well. In the situation when you do encounter them in a confined space, you should take your portal and get out of there. Regroup or reposition and try to get them from a long distance. If they get close, rinse and repeat. Torvald is a different story. In order to properly counter him, you need to have your portal already placed. Otherwise, he will almost always null you and corner you, making it impossible to put a portal down. If there are no other choices and you know you are going to die, toss your harpoon at him and make sure it hits the ground beneath him too, then ult. That way he'll be slowed and take 1800+2500. It most likely won't kill him, but it will take him a second to recharge.

For every other champ, that's up to you and how much you trust yourself. While champs like Makoa can hook you and pull you in, you can also save your portal until he does so, that way you can warp away. To sum it all up basically play Dredge like a long ranged flank.

I use this for Siege Beyond so buy what is necessary (i.e. elimi for credits, reduced healing per round, ultimate charge, etc.) 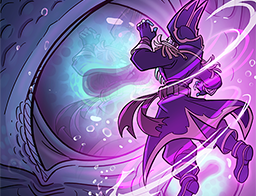 Heal for 200 every 1s while standing near a Shortcut. 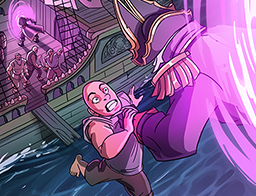 Heal for 400 after exiting a Shortcut. 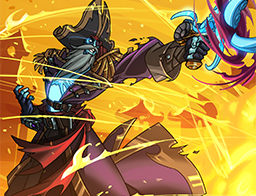 Heal for 150 for each enemy hit by Broadside. 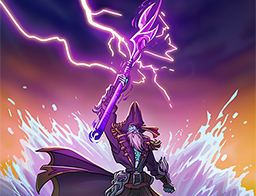 Heal for 140 for each enemy hit with Harpoon. 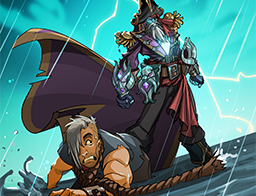 Gain a 300-Health Shield after dropping to or below 50% Health.

Harpoon lodges into terrain and explodes when an enemy comes within 20 units, dealing 1000 damage in a 35-unit-radius area.

There aren't any real champions that long range dredge is strong against, but he does do really well against other flanks and champs who fight at a mid to long distance. Good for attacking points.

While good for attacking points, any champ that can get in close and not get hit can easily wipe you. As well as that, super long range champs like Kinessa and Strix both completely neuter a long distance Dredge without cover. On top of that, champs who have to get in within touching distance and have decent health (i.e. Terminus and Fernando) can cause problems if you don't have your portal ready and set at a good distance. Also don't get nulled by Torvald or else you're just dead.

Dredge but he is long ranged